In June 2019, the owners of Crossfit 718 commissioned an original work of art on the side of their building. The mural was painted by the Slavery Collective and is part of their ongoing Subway Art History Project. That project reimagines the names of famous graffiti writers from the bible of graffiti, Subway Art (1984), and repaints the greatest graffiti pieces with names and phrases that elicit new meaning and new questions.

The Subway Art History Project led to a PhD thesis about the growth of graffiti from child’s play to an original art in the 1970s.

This mural connects with a very important part of the story uncovered in the thesis, the influence that Norman Mailer’s 1974 coffee table book The Faith of Graffiti had on elevating the meaning of graffiti. In Mailer’s essay he connected the young graffiti writers of the 1970s with the Hipsters of the 1950s. Briefly, Hipsters are always-already set up against the Squares; Hipsters are cool and do not support the totalitarian state where Squares are conformists who prop up the totalitarian state.

Norman Mailer connected the young graffiti writers of the 1970s with his grounding philosophy, Hip, and by doing so elevated graffiti from a child’s game to something more revolutionary, subversive and artistic.

This painting can also be viewed as an homage to Martha Cooper, whose photographs in Subway Art (1984) captured the painted subways in context, and by doing so opened the imagination of how graffiti was interpreted, a vision which would become the fixed way graffiti would come to be understood. Thus the mural picks up not only on the graffiti of JSON and Richie (Seen) and the importance of Norman Mailer to the story of graffiti but also to the context that Cooper photographed.

JSON and Richie were changed to read NRMN Mailer. The caricature of Santa Claus was changed to a caricature of Norman Mailer. Santa’s green bag of presents changed to Mailer’s green book, and the phrase in the middle “Happy Holiday” changed to “The Hip Have Faith”. For Mailer, “faith” was a grounding principle of Hipsterism. To truly be Hip, or a Hipster, one had to have “faith”. Graffiti writers became faithful and therefore Hip. Martha Cooper’s image captured a whole car masterpiece, created by some Hip cats, making its way through a cold South Bronx morning about to light up the line.

Can you say that quicker?

The mural is about the growth of graffiti in the 1970s and focuses on three participants who helped create graffiti as it has been understood since the publication of Subway Art (1984): Norman Mailer- an investigator of graffiti, Martha Cooper- a photographer of graffiti and JSON and Richie (Seen)- the graffiti writers.

Graffiti is play, it’s Hip and it’s full of imagination. See above for more details. 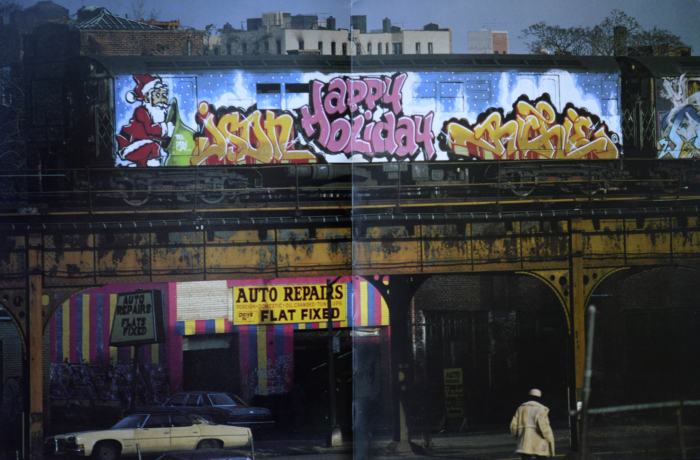 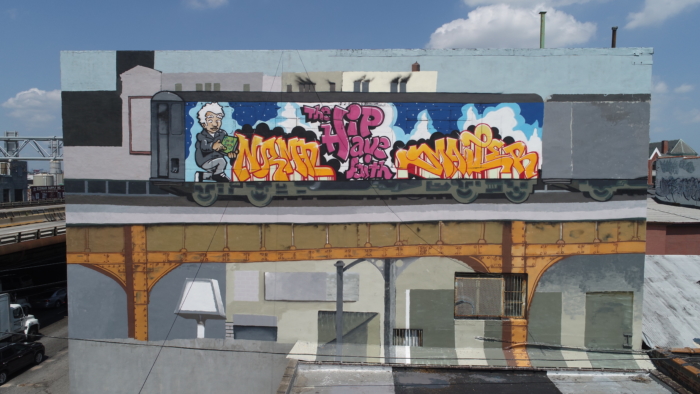 Prepared for the Apocalypse
Scroll to top